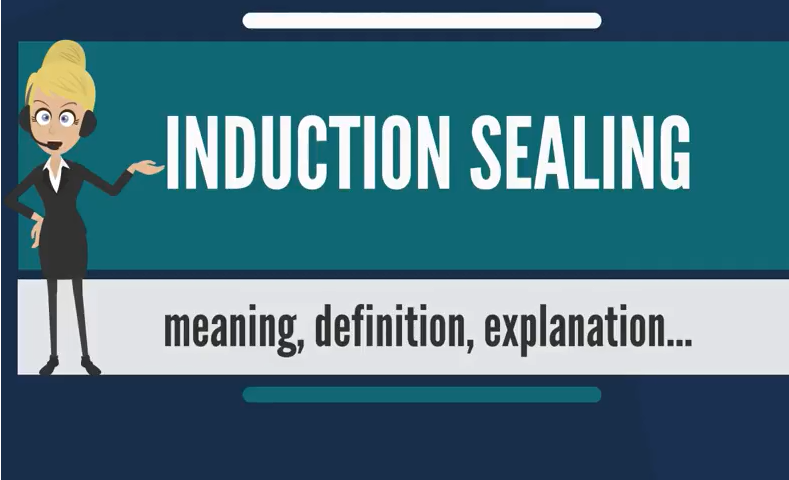 Induction sealing, otherwise known as cap sealing, is a non-contact method of heating an inner seal to hermetically seal the top of plastic and glass containers. This sealing process takes place after the container has been filled and capped.
The closure is supplied to the bottler with an aluminum foil layer liner already inserted. Although there are various liners to choose from, a typical induction liner is multi-layered. The top layer is a paper pulp that is generally spot-glued to the cap. The next layer is wax that is used to bond a layer of aluminum foil to the pulp. The bottom layer is a polymer film laminated to the foil. After the cap or closure is applied, the container passes under an induction coil, which emits an oscillating electromagnetic field. As the container passes under the induction coil (sealing head) the conductive aluminum foil liner begins to heat due to eddy currents. The heat melts the wax, which is absorbed into the pulp backing and releases the foil from the cap. The polymer film also heats and flows onto the lip of the container. When cooled, the polymer creates a bond with the container resulting in a hermetically sealed product. Neither the container nor its contents are negatively affected; The heat generated does not harm the contents.
It is possible to overheat the foil causing damage to the seal layer and to any protective barriers. This could result in faulty seals, even weeks after the initial sealing process, so proper sizing of the induction sealing is vital to determine the exact system necessary to run a particular product.
Sealing can be done with either a hand held unit or on a conveyor system.
A more recent development (which suits a small number of applications better) allows for induction sealing to be used to apply a foil seal to a container without the need for a closure. In this case, foil is supplied pre-cut or in a reel. Where supplied in a reel, it is die cut and transferred onto the container neck. When the foil is in place, it is pressed down by the seal head, the induction cycle is activated and the seal is bonded to the container. This process is known as direct application or sometimes "capless" induction sealing.
Some manufacturers have produced devices which can monitor the magnetic field strength present at the induction head (either directly or indirectly via such mechanisms as pick up coils), dynamically predicting the heating effect in the foil. Such devices provide quantifiable data post-weld in a production environment where uniformity - particularly in parameters such as foil peel-off strength, is important. Analysers may be portable or designed to work in conjunction with conveyor belt systems.
High speed power analysis techniques (Voltage and Current measurement in near real time) can be used to intercept power delivery from mains to generator or generator to head in order to calculate energy delivered to the foil and the statistical profile of that process. As the thermal capacity of the foil is typically static, such information as true power, apparent power and power factor may be used to predict foil heating with good relevance to final weld parameters and in a dynamic manner.
Many other derivative parameters may be calculated for each weld, yielding confidence in a production environment that is notably more difficult to achieve in conduction transfer systems, where analysis, if present is generally post-weld as relatively large thermal mass of heating and conduction elements combined impair rapid temperature change. Inductive heating with quantitative feedback such as that provided by power analysis techniques further allows for the possibility of dynamic adjustments in energy delivery profile to the target. This opens the possibility of feed-forward systems where the induction generator properties are adjusted in near real-time as the heating process proceeds, allowing for a specific heating profile track and subsequent compliance feedback - something that is not generally practical for conduction heating processes.
Conduction sealing requires a hard metal plate to make perfect contact with the container being sealed. Conduction sealing systems delay production time because of required system warm-up time. They also have complex temperature sensors and heaters.